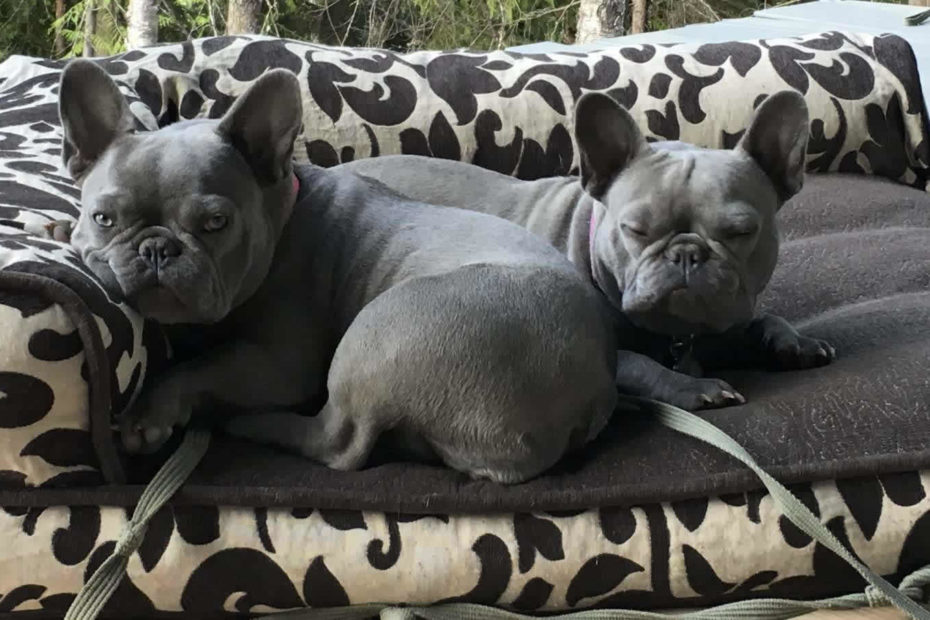 French bulldogs are amongst celebrities’ favorite companions, and it comes as no surprise. French bulldogs, or Frenchies, which is how most people are calling them, are amongst the most popular breed in the world, and just a simple look at their adorable, wrinkly face is enough to understand why. But apart from being charming, Frenchies are also a very intelligent, loyal and friendly breed, despite their occasional temper tantrums.

If I were to ask you what Dwayne “The Rock” Johnson and Reese Witherspoon have in common, you would jump to assume it is their acting career, but, in fact, they are booth proud Frenchie owners. Want to know who else shares their passion?

Hilary Duff has always considered herself a dog lover. Up until 2016, she had Beau, a Frenchie boy she had for two years. Following Beau’s sad passing away, Hilary adopted Peaches, a rescued Frenchie girl that she presented as Beau’s sister and the new troublemaker of the family. Now, Peaches is seen everywhere with the actress and apparently took over her social media accounts. And, after looking at Peaches, who could blame her?

Lady Gaga has long-confessed her love for Frenchies, and she’s proven that by adopting three of them. The oldest one, Miss Asia is so famous, that she has over 200k followers on Instagram. The youngest one, Gustavo, was welcomed into the family in 2016, one year after Gaga decided to adopt Koji.

Hugh is known for being an animal lover, being a proud father of two dogs, Allegra, a poodle-terrier mix, and Dali, a Frenchie he got back in 2010. Ever since Dali entered the family, the two have been inseparable, as Hugh can be seen walking both of his dogs quite often, together with his children. As for the name, Jackman said the Frenchie’s mustache remembered him of the famous painter and that was it.

If you were to imagine The Rock having a dog, you would probably think of a large breed, such as a German Shepperd, or a Great Dane. But just as the many characters he has played, Dwayne is a soft-hearted man and has chosen to welcome Hobbs, a Frenchie girl, into his life three years ago. Hobbs was adopted alongside her brother, Brutus, but the pup, unfortunately, lost his life in an accident a few months later.

Of all the names in the world, DiCaprio could not help it but name his Frenchie boy Django. He does the best he can to keep himself, as well as Django, out of the public eye, but both can be seen walking around town from time to time. Little is known about Django’s age, but the actor was spotted accompanied by Django for quite some years now.

In Legally Blonde, she had an adorable chihuahua, but in real life, Reese is a Bulldog lover. For starters, there is Pepper, the blue Frenchie she welcomed into the family in 2016, who she does not hesitate to post on all her social media accounts. But recently, Reese has also made room into her house for Lou, an English Bulldog that became a member of the family earlier this year.

The Beckhams have no little than four dogs, with Scarlet, their Frenchie, being the first one that joined the family. Scarlet was welcomed into the Beckham mansion in 2011, a few months before Harper, their daughter, was born. Since then, the family adopted three more dogs, but Scarlet remained the only Frenchie around.

No comments to show.